With the ever increasing difficulties entering Iran and Russia, and the allure of the mythical Caspian freight ferry, Baku acts like a funnel for overlanders; cyclists and moto hobos alike. Having not seen another motorbiker for weeks and just the occasional cyclists, old town Baku had itself a plague of two wheelers awaiting the boat or a visa.

The intention had been to pick up the Uzbekistan visa on Monday morning and start the hunt for a boat ticket in earnest. Gods of the road had other ideas. The visa was approved but the bank of Azerbaijan with it’s huge new mirror clad office in the heart of the city can not process payments at the end of the month, and despite best attempts to cajole the consulate with promises of calls from Steven Gerrard and the Queen, it was out of his hands and I must return on Friday. Soon accepted by the two wheel community nights were spent on the hunt for 1 Manat beers accompanied by Chinese whispers and rumors of boats. 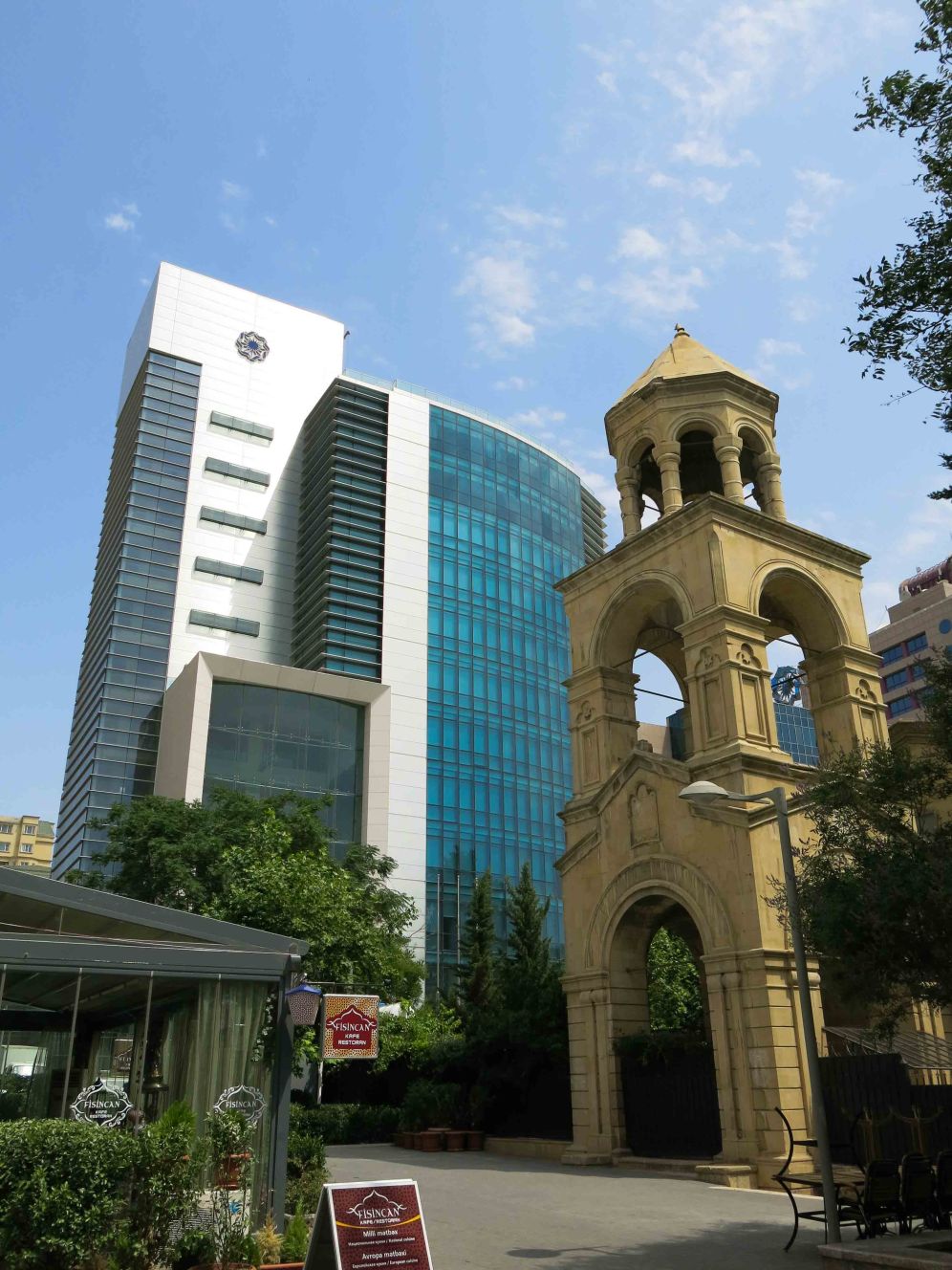 No payments at the end of the month, what do think we are a national bank?

Friday morning with visa in hand I made the call to Vika at the ticket office (tel – +994552665354), a boat was leaving that afternoon if I could get to her then the ticket was mine. After 5 days of lazing around the city everything went into manic overdrive. A taxi to the old port to find the ticket office (40.373254, 49.86454), hidden through a small doorway to the north of a new park, part of the effort to masquerade the true Baku. Asking around for directions to Vika, I may as well of been looking for a ticket to the moon, much were the looks of puzzlement to a question they must get asked every day. Half an hour later I had the ticket and could released the bike from customs (40.362742, 49.934426). That was the easy part, starting the bike on the other hand not so.

After sitting on the dock side through 6 days and a sand storm, everything was covered in a fine dust, looking more stone than metal and plastic, it took what seemed like an eternity, everything the battery had and a whole lot of cursing before the engine fired into life. Relief. Knowing the clock was ticking to make the boat 80km south in Elet and the tool kit with the other luggage back at the hostel, going back for it would almost certainly have meant missing the boat and $220 for another ticket. Letting the engine tick over and release the gremlins peace was restored. Until, a dockside interfering arse hole came over to nosy the bike, normally this isn’t a problem, people are intrigued, but this guy before I had chance to stop him opened the throttle full and held it there, a swift fuck off and a slap of the wrist he let go, but the engine died. Another anxious 10min on a now seriously weak battery, there was life in the Peril again. Without wasting another minute I hit the road back to the hostel for the luggage and on wards to the new port in Elet  (39.97668, 49.441208) and the boat.

The boat from Baku carries primarily freight trains heading east from Georgia to the Stans of Central Asia. On this crossing slotted in between the carriages were, 6 motorbikes, 3 from the UK (Oli, Stuart and I), 1 from Germany (Marcus), 1 from the US (2 up, Gary and Jamie) together with an Irish registered bike with 2 up from the States (Mike and Rebecca), a lone cyclist (Nick) and a German Turk transporting a kebab machine from Berlin to Kazakhstan, why you ask? I’ve no idea either. Most had been waiting a week to make the boat, in reality the payment processing hadn’t cost any time at all. 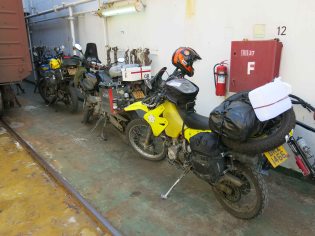 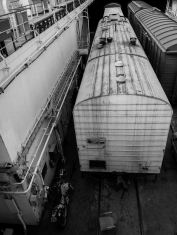 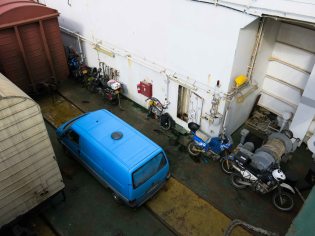 With a strong Northerly blowing the boat left port and quickly took refuge behind the Absheron Peninsular. Wrongly thinking we’d seen the last of it, anchored there for the next 2 days we were treated to a distant view of Baku and time to reflect on a apparently Western city, but one scratch of the surface reveals it’s Soviet heart. We also learnt a few valuable lessons about the boat and it’s surly crew, so if you’re heading that way listen up. A little runt of a man will try to charge you for using his ramp to board the ship, ignore him long enough and he’ll disappear. Food is included in the ticket price, contrary to what the Babushka in the galley says, any problems speak to the captain, just expect the soup to get weaker, meat to get grayer and her face more begrudging as each day passes. For proper tools for proper jobs, like firming up your rear shock, seek out the Georgians in the train carriages, they’ve some thing for everything and good stories about fighting the Russians.

Everything you need is just behind the door

Staring out to sea became a serious pastime 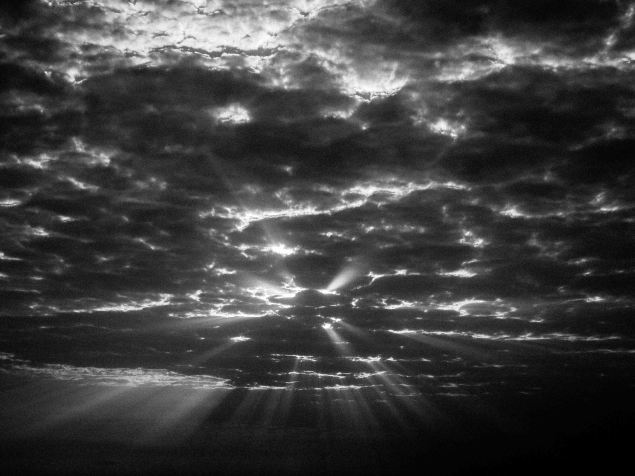 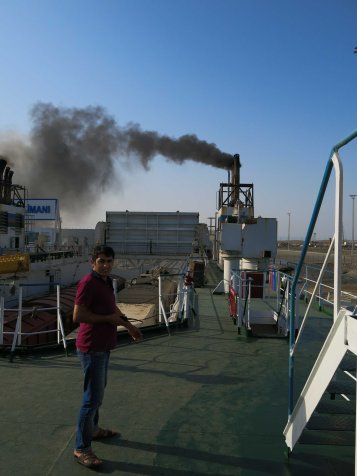 Waking the second morning the engines were full steam ahead with the bow pointed firmly towards Aktau, Kazakhstan. It stayed that way for the next 24 hours arriving early in the morning or late at night depending on your view point and we were kicked unceremoniously onto the dock side. 10 hours, 17 official stamps, a whole lot of head scratching and a brief sleep in a car park later we were released from the harbor as an international armada of bikes with 1000 miles of desert and the silk road ahead of us. 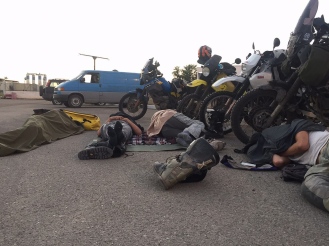 3 thoughts on “Boat From Baku”