When I first started planning this trip months and years ago Tajikistan was top of the list, a must see highlight. Most people have never heard of it and admittedly I’d of struggled to place it on a map. But sporting the high altitude Pamir Highway, the Wakhan valley which skirts the border of Afghanistan, and lesser known Fann mountains which would be a top attraction in any other country, it really is a bikers paradise.

Riding out of the final flatness of Uzbekistan I was a little apprehensive I’d put it on too high of a pedestal. Within 5 minutes of leaving the bonkers bureaucracy of Uzbekistan behind, seeing the smiling faces of the border guards and customs officials all welcoming me to Tajikistan and the young lad giving me a couple of fresh green apples straight out of the gardens which surround the border building, I knew my fears were unprecedented.

First stop on the road to Dushanbe were the Fann mountains where I’d heard of a beautiful camp spot next to Iskanderkul lake. Little did I know that on a weekend it becomes the al fresco party spot for people wanting to get out of the cities. With a full on sound system set up 5 meters from my tent I had little chance of sleeping and as they say if you can’t beat them join them. The only problem being they insisted the foreigner dance, after few vodkas to loosen the limbs I reluctantly obliged. Fortunately for me their dancing was terrible, so when I pulled out the Paul Cutts lawnmower special and mowed the imaginary grass around the campfire they were mesmerised, by now I expect the dance floors of Dushanbe will be awash with this move. A trio of Polish climbers were also staying nearby and invited me for light hike the following day, their definition of light varied from mine, they were straight up a mountain side like goats, after 3 months sitting on a bike with little exercise they left me wheezing in their wake, but the scenery was epic.

Back into the mountains 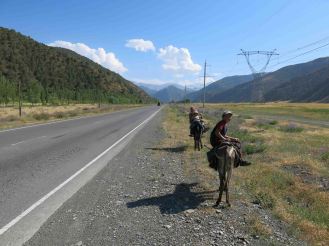 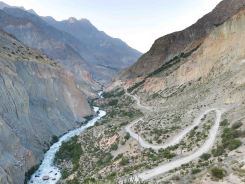 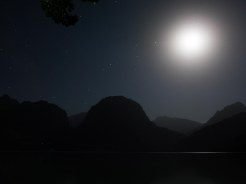 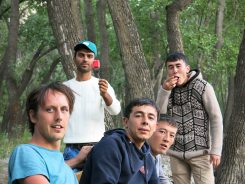 Between Iskanderkul and Dushanbe sits what’s marked on the map as dangerous tunnel but goes by more evocative names; tunnel of terror or tunnel of death. Fortunately it has got so terrifying that the authorities had seen fit to close it, kicking all the traffic up and over the 40km Azob pass. With it precarious drops, snow melt washouts, pebble strewn climbs and ankle deep dust thrown into the air by the stream of crawling lorries, the tunnel must be truly horrendous for this to be the safe option. On the DRZ it was great fun. 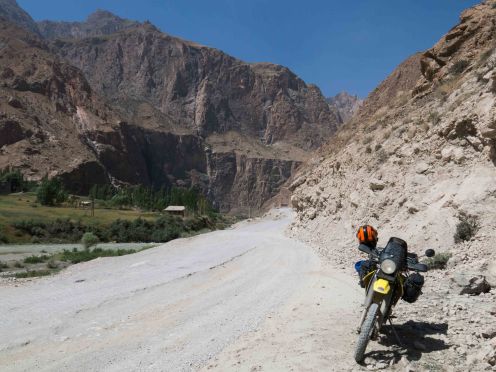 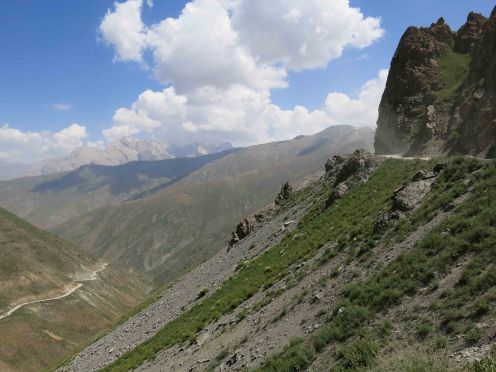 It was on this road stopping to buy food I discovered a quirk of Tajikistan, a shipment or two of carry bags on route to Britain must have got waylaid, so everyone heading home from the Bazaar appears to have been shopping a Morrisons. 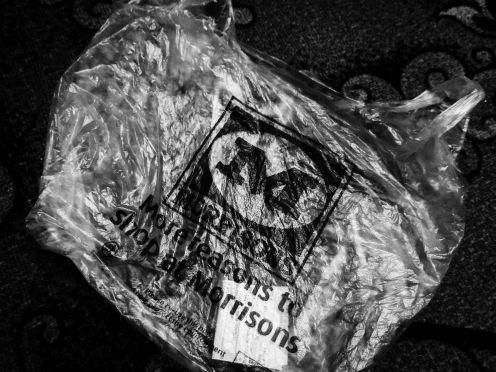 More reasons to shop in Tajikistan

Not only is this part of the world a mecca for motorbikers but masochistic round the world cyclists too. Pitting their bikes and bodies against the baking deserts and mountain passes. How they do it is beyond me. At the Greenhouse Hostel in Dushanbe there were maybe 20 heading east and west in equal numbers. Those coming from the Pamirs gave the first reports of what lay ahead. For a number of apparent reasons; unseasonable rainfall, high winter snow fall combined with high summer temperatures, a landslide had taken out 40 houses and closed the Pamir Highway East of Khorog indefinitely, diverting all traffic including the many Chinese lorrys into the Wakhan valley. My intention was always to take the Wakhan, but with further reports of landslides, washed out bridges and river crossings there too it wasn’t going to be an easy ride.

Full respect, even with the lycra

Show us your push rod

The road to Khorog is less road and more track and beautiful in a stark, brown and dusty kind of way. From Qal’ai Khumb it follows the Panj river gorge which marks the boarder between Tajikistan and Afghanistan, the dirty brown water boiling like hot chocolate. Progress was slow going due to both the road and the scenery. Stopping frequently to look across to Afghanistan and the people making their way by donkey or motorbike along the precarious path draped like a string along the cliff faces. By the time I reached Baravin-Tar and the military check point my stomach was feeling decidedly dodgy and when a couple of bikers coming the other way said there was little in the way of flat camping ground further ahead, we all pitched up with the soldiers and their tank, it’s barrel pointed straight across the river to Afghanistan. Grateful for a bit of company at there isolated posting they were great fun, taking us out on the tank before cooking dinner. During the night my stomach went nuclear, frequently darting out into the darkness like a chicken that’s about to explode, fearful of using the torch in case the Taliban decided to take a pop shot at the squatting white man across the river. I’m sure it was unfounded worry, but the fact the soldiers had their tent pitched safely in the shadow of the tank and they’d put a young recruit with an AK-47 outside ours didn’t fill me with confidence. 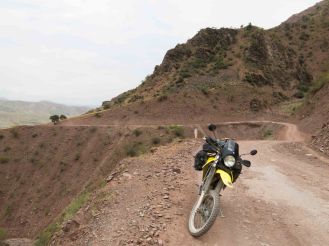 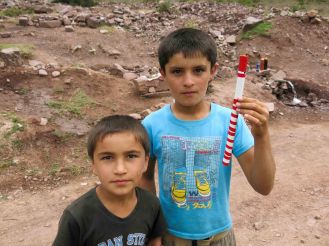 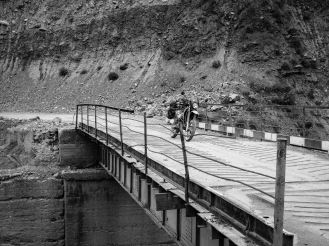 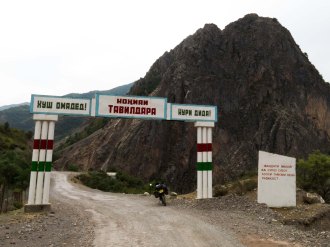 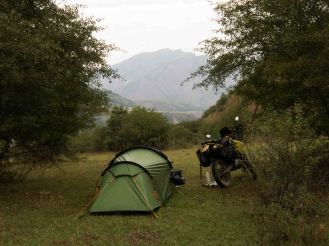 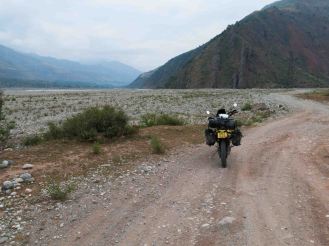 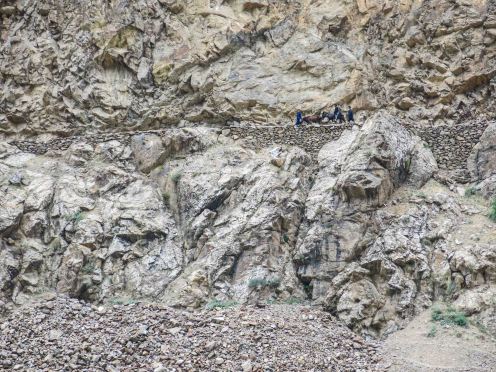 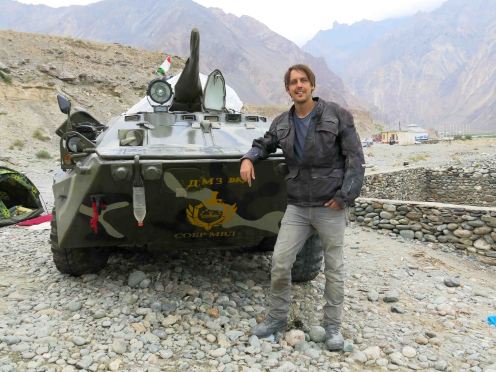 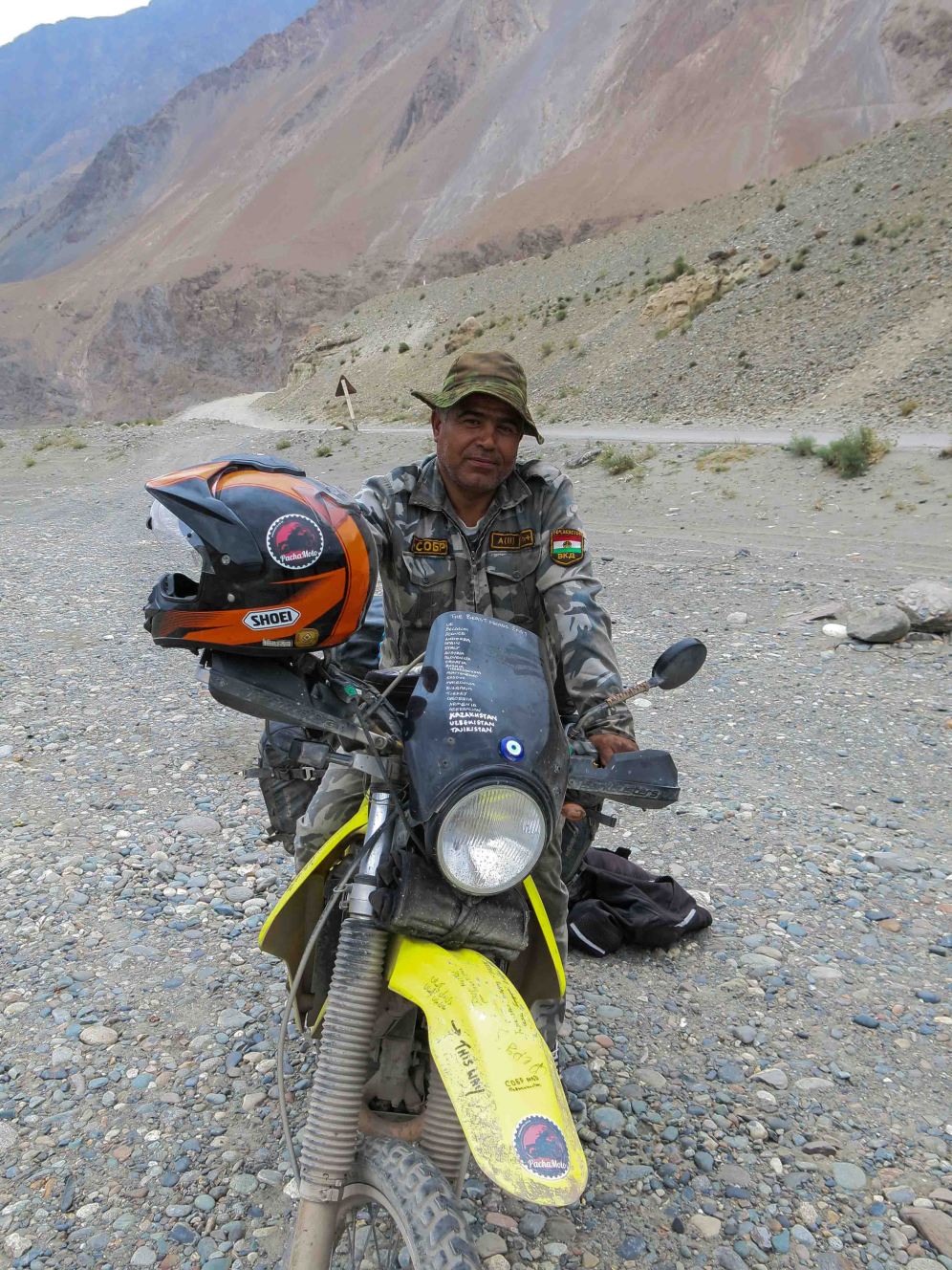 The following morning marked day 100 of the trip and definitely the lowest point so far. Riding into Rushon the usual crown gathered around the bike, as if a spaceman had dropped from the skies, when I proceeded to wretch the content of my stomach at the roadside the crowd quickly dispersed. By the time I reached Khorog it took all my effort to climb off the bike and collapse into a bed, where I spent the majority of the next 4 days.

Feeling rejuvenated and ready to ride again I entered the Wakhan. A geographical anomaly, a legacy of The Great Game, a finger of land separating the old British and Russian Empires. Vast scenery, fertile valleys with views across to glacial capped mountains in Pakistan, kids running out from thier white washed adobe houses to wave and high five. Riding with Brian and Sheila a bloody good set of Ozzys who’ve practically ridden the planet 2 up on their 1200GS, the difference in bikes became apparent. With half a ton of bike, luggage and people they found the going tough, getting stuck in sand and taking an unexpected dust bath. Picking the bike back up took all of Brian and my efforts and he’s build like the proverbial dunny. As the road began to serpentine out of Langar, I stopped to manically free a wasp from under my T Shirt and realised they hadn’t rounded the next bend. The bike was shiney side down and this time it hadn’t been a soft landing. They were fine but the road had beaten them and we parted ways, them heading back to Dushanbe to find an easier route to Vladivostok. 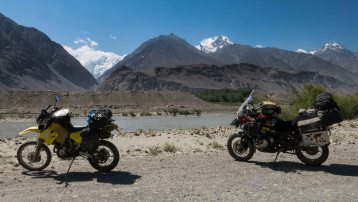 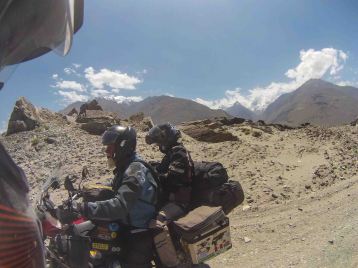 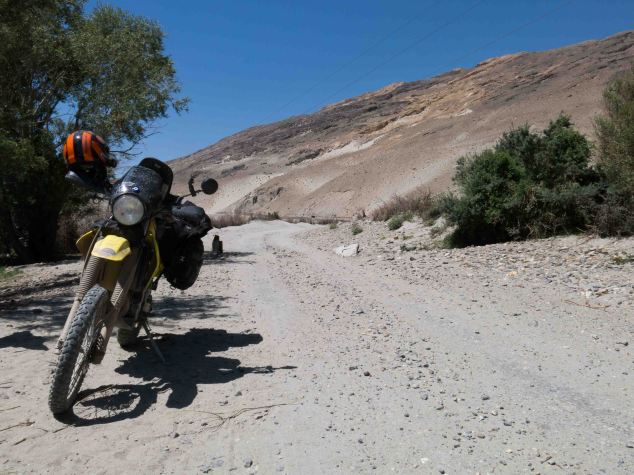 Continuing on the road climbed and deteriorated as quickly as the scenery became more dramatic. The Peril swallowing with ease everything thrown at it, river crossing, sand and landslides. Here the bike has come into it’s own. Rounding one sandy turn, like a white line drawn across the mountain side were a string of Chinease lorries held back by another landslide, behind that several more which had become stuck in the mud, one pushed into the ravine to clear the path for the ones behind. As the sun set igniting the mountain scenery in gold I crossed the Kharagush pass (4344m) and rejoined the Pamir Highway camping by Lake Bulunkul. 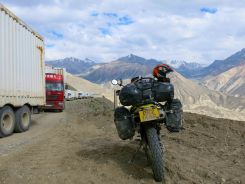 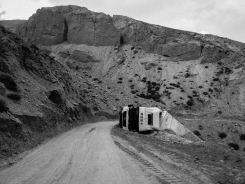 Move out of the way

Sunset over the pamirs 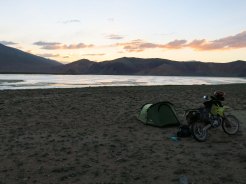 Once over the pass everything changed, the culture, the faces, the landscape. Although still in Tajikistan the people were distinctly Kyrgy, yurts pitched against mountain backdrops and yaks grazing on high altitude plains. For the first time in over a week, almost uninterupted tarmac (with the exception of detours to unreachable hotsprings), meandering between the valleys and peaks all the way to Murgab and over the 4655m Akbaytal Pass. By the time we reached the pass both the Peril and I were struggling to breath. We both chugged over the top and descended to Karakul before making the final climb, Ayzyl-Art Pass, under the gaze of Peak Lenin and through no mans land into Kyrgyzstan. 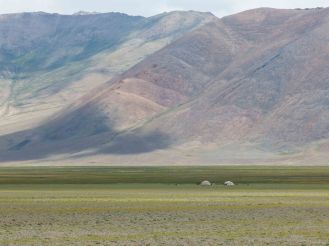 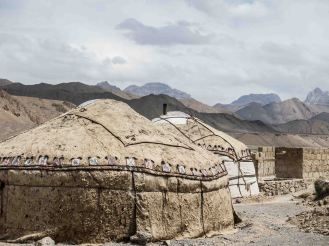 Theres a path there somewhere

‘Road’ to the hotsprings 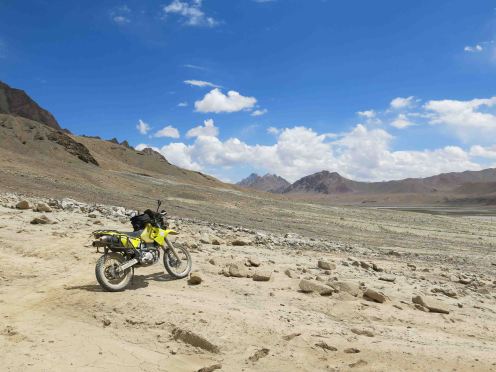 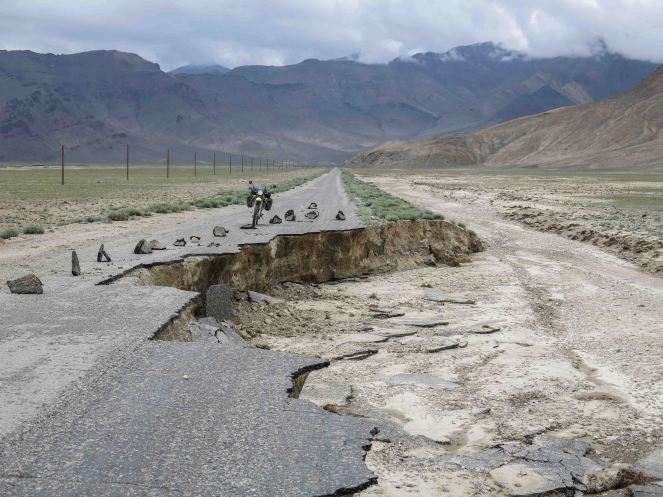 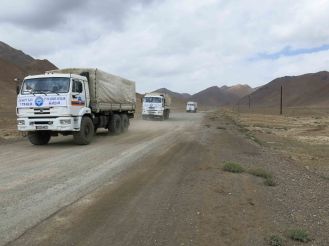 Relief effort heading into the Pamirs 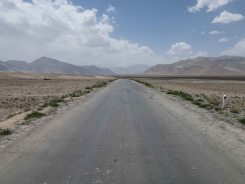 Tajikistan is the most remarkable country and is much higher than the pedestal I’d dare to put it on, it is the roof of the world. After over three months on the road, the initial excitement and enthusiasm had started to wain, but this place has reignited it. With this bike and these roads I’m enjoying the riding more than ever. I’m ready to turn round and do Tajikistan again but there’s another country, Kyrgyzstan, waiting to be discovered.

5 thoughts on “Roof Of The World”