So where were we, in Plovdiv I believe. An amazing city which just happened to appear on the map as the sun was sinking and the late afternoon apprehension was rising, as it does everyday when home for the night is still an unknown. Arriving into the old town on the night of graduation, the labyrinth of streets alive with the sound of horns from cars adorned with banners and streamers, it was party night. The city itself has retained a lot of it’s historical charm which the Russians seemed to try to eradicate from most places back in the day.

This was the last stop before crossing the boarder into Turkey and after taking the first day off since Spain 3 weeks before, I was ready to face the notoriously chaotic carnage of Istanbul traffic. Approaching the boarder the seemingly endless convoy of lorries nose to tail waiting to cross appeared and continued for mile after mile. Me and the Peril zipping past, I suspect some of them are still there waiting now. Once all the usual bureaucracy was sorted I rode into Turkey and towards the first of many many Mosques, this one against a backdrop of an ominous and evil looking sky, time to find camp and face Istanbul in the morning.

Riding into Istanbul wasn’t the horror show I’d been lead to believe, don’t get me wrong it is chaotic and some of the drivers really are terrible but once engulfed among the traffic there’s lots of fun to be had. The aim was to make it to Istanbul Hostel and meet Emma the fellow 2 wheeled explorer and absolutely crazy cat riding to Bishkek on Grettle the Vespa, we would embark on the visa mission together. Unfortunately she hadn’t found the streets of Istanbul so forgiving, getting involved in a bit of a head on smash earlier that week, fortunately she was OK but the verdict was still out on whether Grettle would make it.

In the shadow of the blue mosque the hostel sits in the middle of old town on the edge of the Bosporus, so as the roads narrowed, became enclosed,shops spilled out onto the streets and the riding got more and more interesting, I made a discovery that would hold me in good stead for the rest of the country, bikes can go anywhere, the rules of the road don’t necessarily apply. And with that new found information made it to the hostel and the good news Grettle lives.

The visa mission started post haste and the next morning The Peril and Grettle set off to the Tajikistan embassy, after a good chat with the chap there who was intrigued by both our trips, but probably more so with the Vespa heading to central Asia, we were back out the door an hour later visa in hand. Too late in the day to make it to the Uzbekistan embassy on the other side of the city, that would have to wait until after the weekend. This gave plenty of time to take in the sights and sounds of the city and meet the great people in the hostel. Emma and I teamed up with Isabell an thoroughly delightful egg from Germany and few others to make a half dozen good eggs and we spent the next few days wandering the spice market, grand bazaar, the cistern a huge underground cavern in the heart of the city, numerous mosques who’s names escape me, drinking, them dancing and me objecting.

At the Uzbekistan embassy we were told the wait would be 10 days for the visa and as much as the city is amazing when they said it was possible to pick it up in Baku it seemed a jolly good idea. Not ready to leave the city just yet as I’d got quite use to calling the 21 bedroom dormitory dungeon home and was still having fun, I stayed another 2 nights and headed to the Hammam with Isabell. After both being laid on a marble slab like a chunk of meat wrapped in what can at best be described as a tea towel and left to sweat for what seemed like an eternity, a little Turkish fella who was to get quite familiar with me quite quickly lead me off to an annex to be washed, massaged and told I was not only fat but dirty too, when I exclaimed that in that case I’ll fit right in in Turkey, he didn’t laugh. My massage and light insulting was good but whatever the big lady had done in the other annex with Isabell must have been spectacular, she was smiling like a Cheshire cat and even described it as one of the best experiences of her life.

Cleaner than I’ve ever been and with a heavy heart it was time to leave Istanbul, but also ready to hit the road again. Emma was to take the coastal road along the Black sea and towards a placement teaching art in Bishkek. I’d decided to head inland to Cappadocia and put my off road riding to the test. I’m certain our path will cross on the road again and she’ll have a multitude of crazy stories to tell.

Looking out across the Bosporus, Europe behind me the whole of Asia laid out in front, wondering what lay in store crossing this continent over the next few months I boarded the ferry and got to chatting with Bazrum a fellow bike who’d parked up beside me. Admiring the ever growing list of countries on the screen of the bike, he told me he was a chef and inquired if I was hungry. Yes I was, the Turkish breakfast of bread, eggs, tomatoes and cucumber isn’t enough to keep a man riding all day, and with that I was told to follow him off the ferry. Weaving though the streets on the Asian side of Istanbul we pulled up at a brand new restaurant on the waters edge looking back towards Europe, Bazrum was the head chef and the grand opening was tomorrow, he wanted a British mans insight into his new menu, doing my best Loyd Grossman impression surrounded by people busy getting the restaurant ready I proceeded to eat and drink everything that was put in front of me and without having to pretend told him it was all fantastic, when I reached for my wallet he wouldn’t except a Lira.

Back on the road and heading South East towards Goreme and Cappadocia thorough big mountain cuts, walled on both sides by towering rocky outcrops the skies ahead turned into a behemoth of a storm filled with grey menace which gave the impression the world was to end at any moment and made every storm experienced so far pale into insignificance. If all the previous storms were combined they wouldn’t beat this one in a fight. With no where else to go but camp before it hit me full force I dived into what appeared to be a camp site, I never did work out what it was behind the trees but the security guards manning the entrance said I could look around but couldn’t camp. As the first rains began to fall they let me take refuge with them in the hut and via Google translate said 10km back along the road in the national park camping was free. Offering to let me stay until the storm passed I declined there offer as light was fading and I’d seen from the road what was on the horizon, this storm was setting in for a long time and I wanted to get the tent set up and take cover before the main event. By this point all hell was breaking loose, the wind was charging through the trees, day had tuned to night under the heavy skies, rain bouncing and lightning bolts all around, retracing my tracks I gave the peril everything she had and charged out of the leading edge of the storm into the dryness of the other side and made it to the national park with just enough daylight and time to get the tent up before the behemoth caught me up again, and spent a long wet night in the tent.

Making it to Cappadocia the next day remnants of the storm remained, at one point closing the road while snow plows were sent out to clear the hail stones. But once into the central part of Turkey it’s open landscape backed by stunning mountains were all dwarfed under a huge seemingly endless sky. It really was stunning. Cappadocia is a toursit trap in the finest form, there’s a reason so many people head there and I stayed for 3 days exploring the fairy chimneys, cave filled valleys and testing out my off roading capabilities.

After a good few days playing tourist it was time to head back into the real turkey, where whenever you stop someone apears with a cup of chai and if you don’t mount the bike quick enough another cup will appear and you can’t ever get going again. With a bladder like mine this can be a self perpetuating problem, the more chai you drink the more you need to stop to release the chai, receiving more chai and the circle continues. At points I doubt there was more than 30 miles between stops.

But after a stop start few days I got to the North East corner of Turkey and dropped over the mountains which fringe the Black Sea, not really knowing what to expect of this coast line I was surprised to find mountains draped in lush green forests, from peaks hidden in clouds to the muggy heat of the waters edge.

Turkey is the last chance to get anything of any quality in the way of tyres before heading further east, so with that I ordered a spare rear tyre to be shipped to Trabzon and spent the next 4 days waiting in the delightful Adelante hostel. The Hostel is tucked away in the old streets of the town and run by the wonderful Elif, a magnificent hostess and it really felt like a home away from home and great way to end a fantastic few weeks in Turkey. 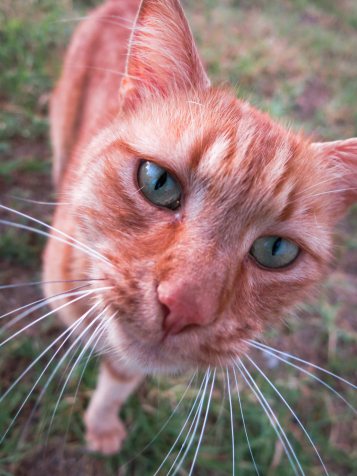 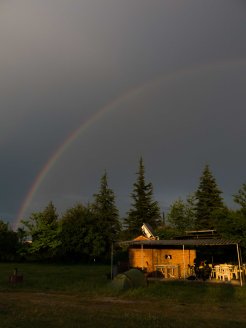 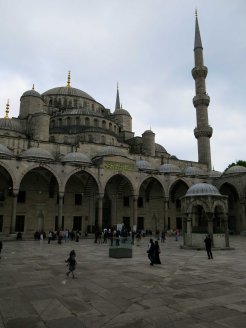 One or many Mosques, this one was quite blue 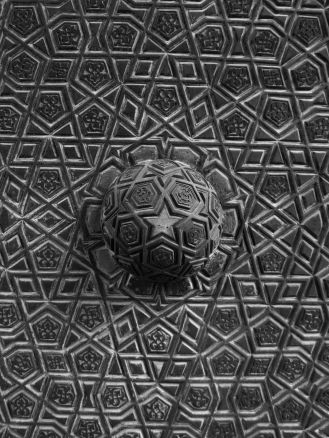 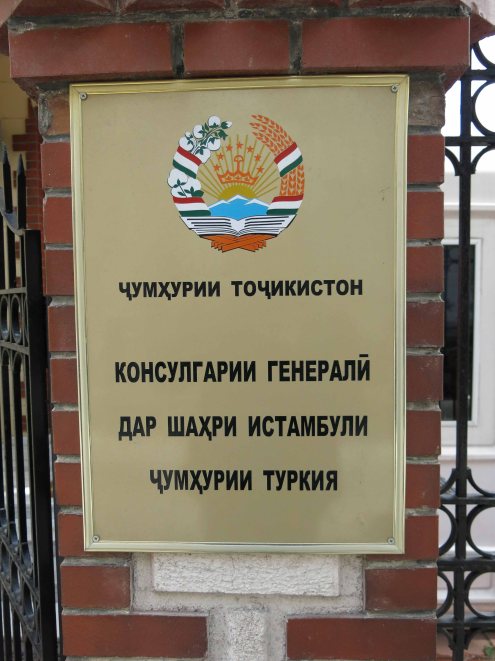 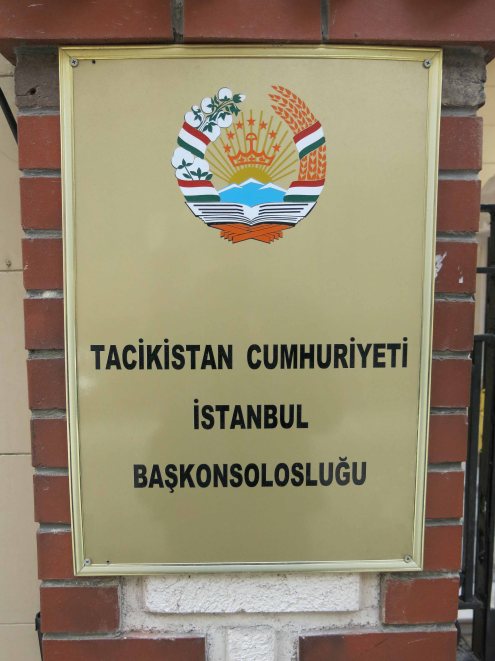 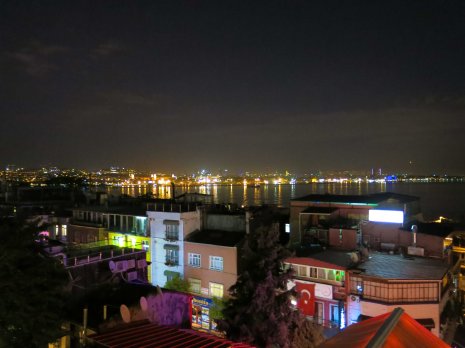 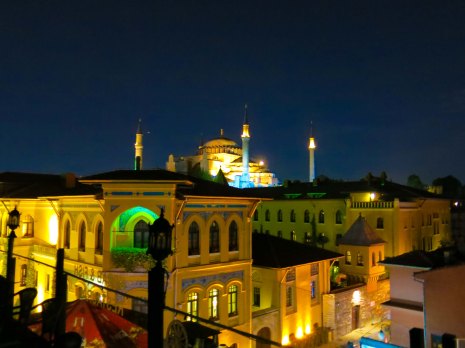 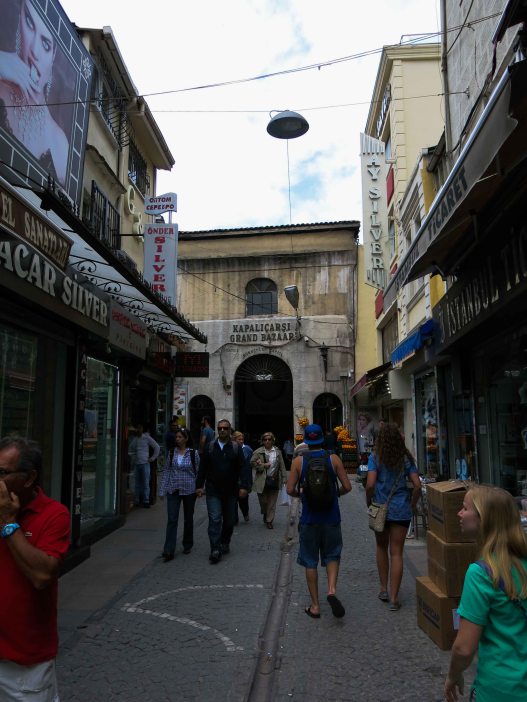 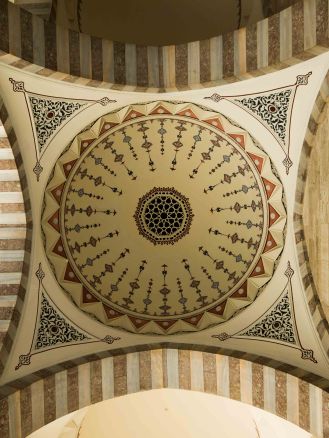 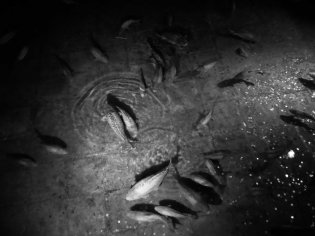 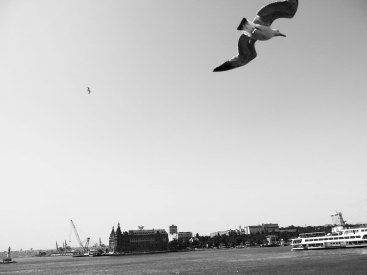 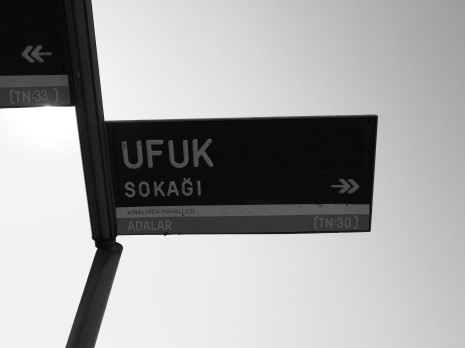 There she goes, Emma and Grettle

Must remember to take photos of the camp with the tent 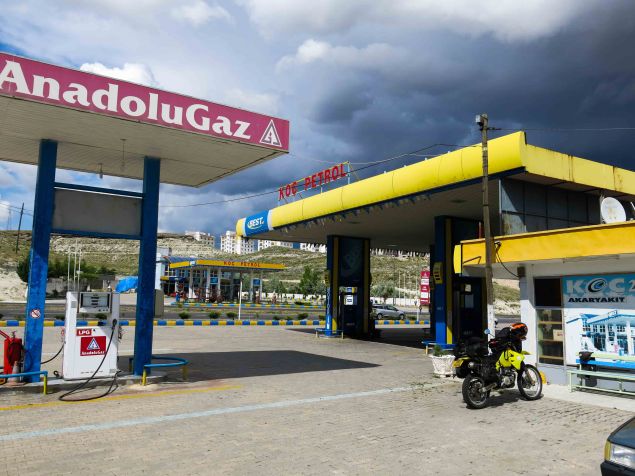 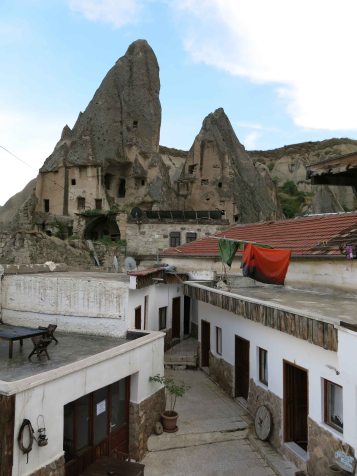 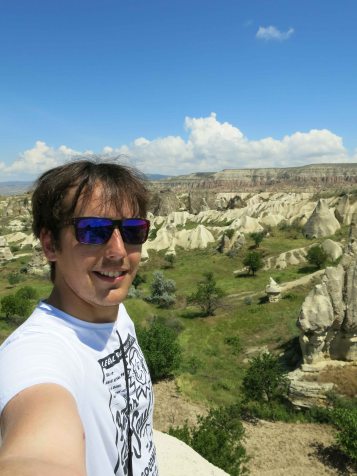 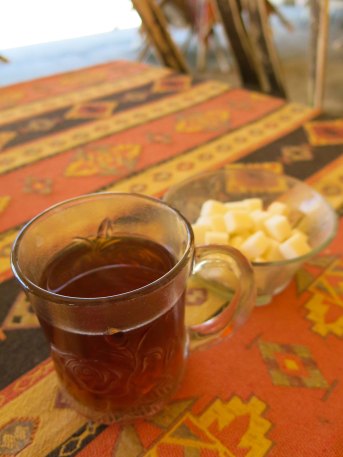 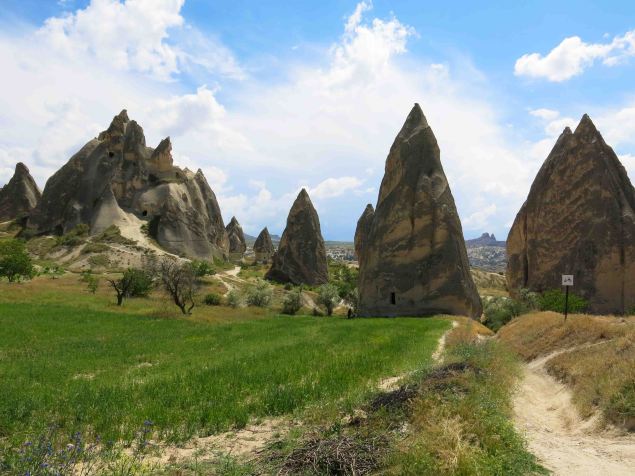 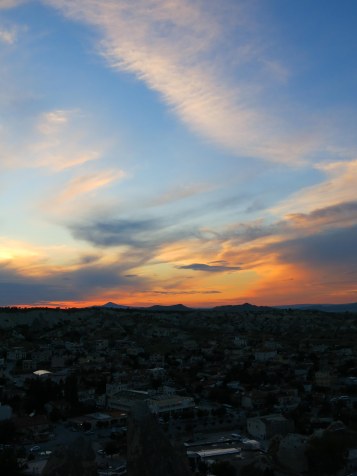 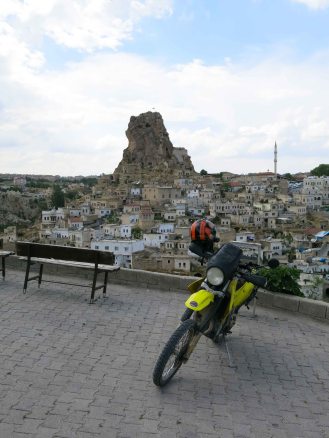 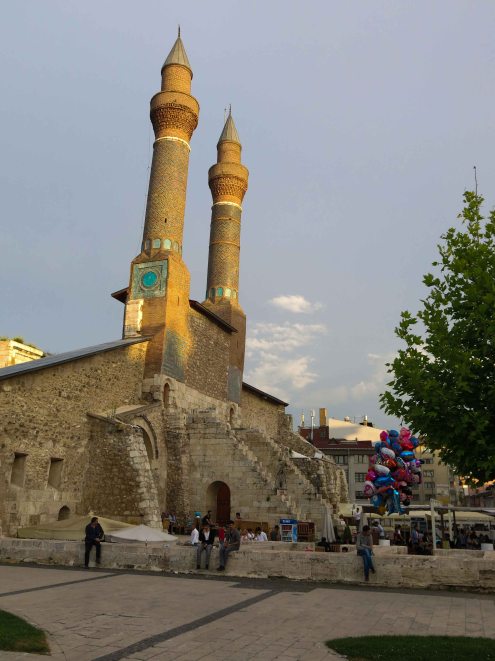 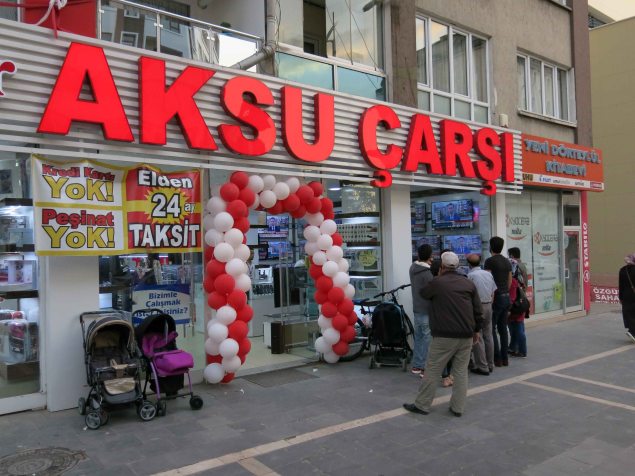 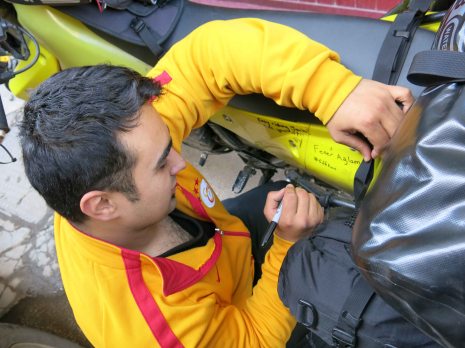 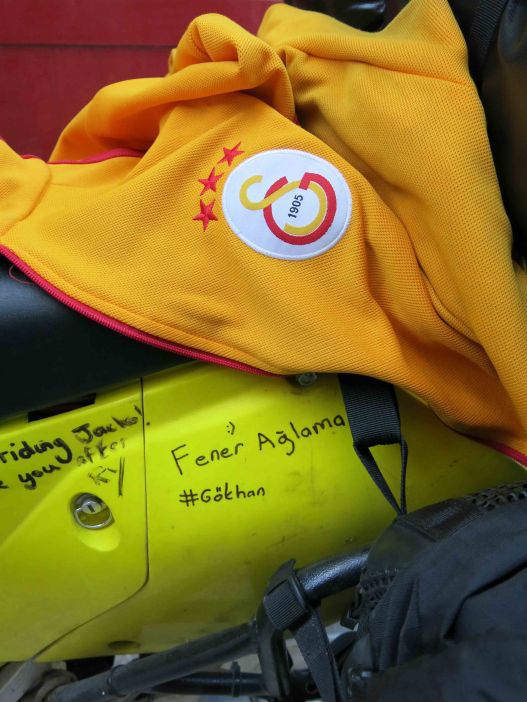 A football slogan wont get me into any bother 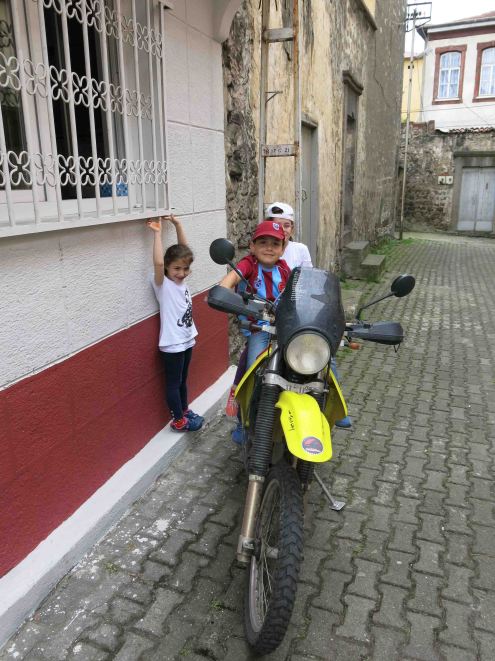 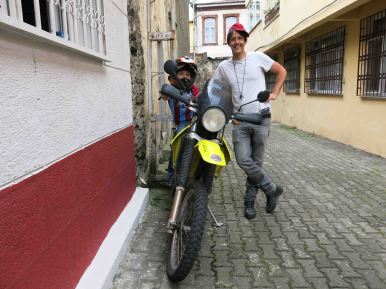 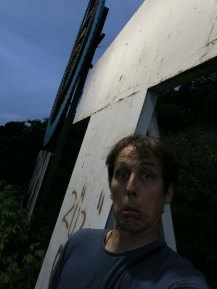 This is a bus company, their slogan “Ride Kamil Kok”

Have tyre will travel

Elif at the Adelante