The bike is fixed. Hooray. Leaving Don Det, where I’d planned a route through Laos, the bike stated leaking rainbow water. With the route being remote and the puddle behind the bike getting worse my initial backup plan to make 400 miles to Vientiane was scuppered, the only option was to divert into Thailand where parts couldn’t be too hard to find right? Wrong. I found a great garage, Yak Motors in Ubon Ratchathani, but they couldn’t find the parts and all my contacts (2) in Thailand would have to order with a 2 week wait from Japan…. DW motorcycle Scarborough to the rescue, next day delivery to them and 5 days to Ubon. The pump seal arrived on time, fantastic, but me being a ham fisted clutz cracked the pump plate fitting it. What a wanker. God bless the guys in the garage their optimism was infections and they tried all day to fix my feck up but it soon became clear more parts were required. DW’s to the rescue again, another 6 days wait with a side trip for me to Bangkok, then with the plate replaced all was good with the world again and I was back on plan. 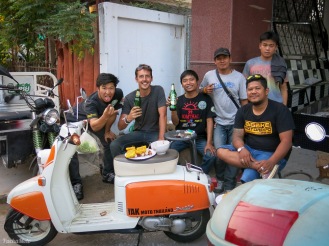 The plan. To take the back roads towards Phonsavan and the Plain of Jars then head for Long Tieng, once Christened – the most secret place on Earth! That’s a bit of a false hood. At its height during the 70s it was home to 40,000 people making it the second largest city in Laos, and one of the busiest airport in the world. Less people have seen or know what’s in my loft, but regardless of this it’s an interesting place. Warning here comes a history lesson ripped straight from the pages on Wikipedia. 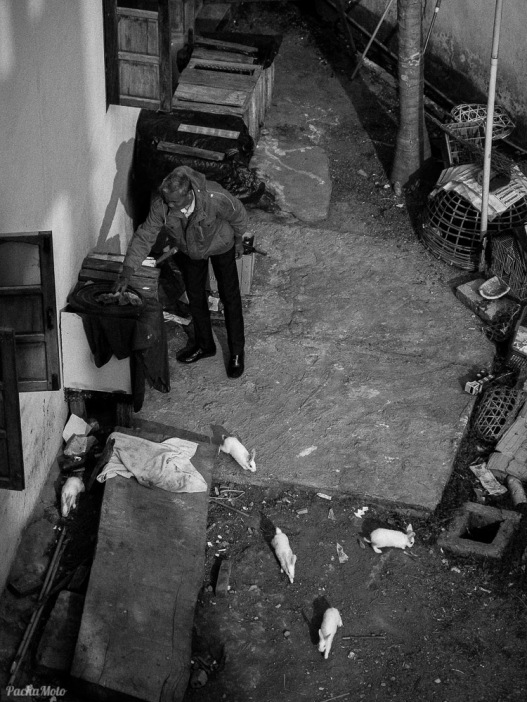 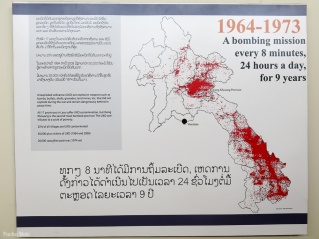 Or there would have been a history lesson had I of made it. At Cha Ho a friendly yet heavily armed contingency of police and army – who refused a photo – turned me back on the first infiltration attempt from Phonsavan. The second sneak attempt taking ‘highway’ 5 from Tha Vieng to Xaysomboun quickly deteriorated into a 50 mile jungle hill climb, alone and fearful of breaking a leg I retreated and ended up in Pakxan. Just to give you an impression of the place I didn’t reach, during the Vietnam War American were officially – not in Laos. However, a secret collective of pilots and CIA agents code named Ravens who turned in there identification were stationed at Long Tieng, so secret even Congress didn’t know it existed. From here the Americans alongside the Hamong, a Highland minority in Laos who opposed communism, would fly sorties throughout the region in an attempt to stop the progress of the Ho Chi Minh trail. As a consequence of this Laos holds the title as the most heavily bombed country, per capita, on Earth. And not just regular bombs, these were decidedly vicious cluster bombs which showered the area with even more smaller shells – colloquially and almost innocently known as ‘bombies’. Innocent they are not, to this day they still account for 300 casualties per year as the unstable ‘bombies’ lay hidden in forests and rice paddies. Seeing at least 5 separate Mines Advisory Group (MAG) clearances taking place along the road side, some within spitting distances of villages and schools made me realize the American occupation of foreign soil really is the gift that keeps on giving.

I guess in a sense it’s like a jungle Fylingdales, had Fylingdales bombed Yorkshire and Lancashire back into last century. 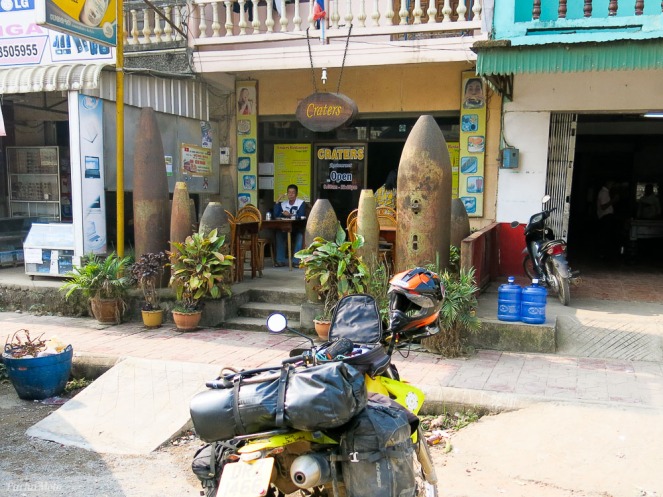 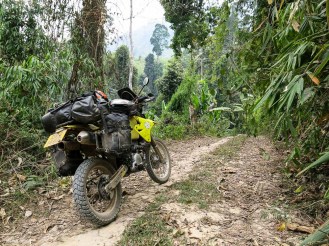 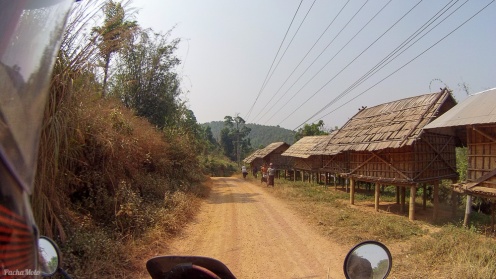 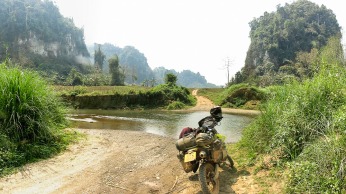 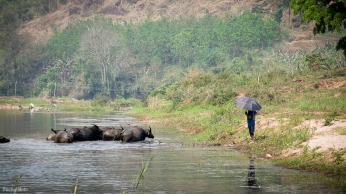 According to a pair of Brits driving a Landcruiser back to the UK from Australia there’d been a fresh security alert from the Australian Foreign Office warning against travel to the Xaysomboun Province due to recent unrest. Although the war ended nearly 40 years ago the ripples of consequence aren’t restricted to just the bombs left behind. Only 3 years ago did Xaysomboun become established as a province, theoretically opening it up to foreigners and removing Long Tiengs restricted access. This might explain the contingent of security that greeted me at Cha Ho. A few days later chatting to a British ex-pat on route out of Vientiane he confirmed my suspicious with reports of Chinese contractors building a new road through the province being shot at. I decided the risk outweighed the reward of seeing a crumbling old air strip and headed into the peaceful landscape of the north. 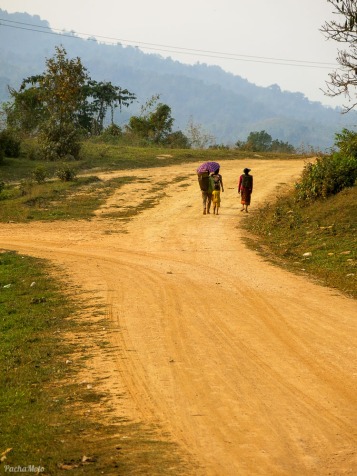 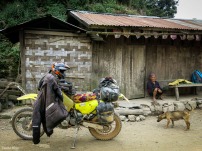 While Loas recent history may be bastardly brutal the country itself is beautiful and serenely picturesque. Coming towards the end of the dry season it’s a mix of green valleys, autumn colored hills, and dusty, dusty roads that turn everything along the way side earth orange – palm fronds, thatched huts, overturned banana lorries and even me. Spending a couple of weeks exploring the roads and backroads was a mix of karst scenery, limestone caves, hill tribes, smiling faces of waving people – so much waving my arm began to ache, deep green rivers with wild swims when the dust and heat became choking and a couple of flat tires. It was magnificent with the exception of the punctures. 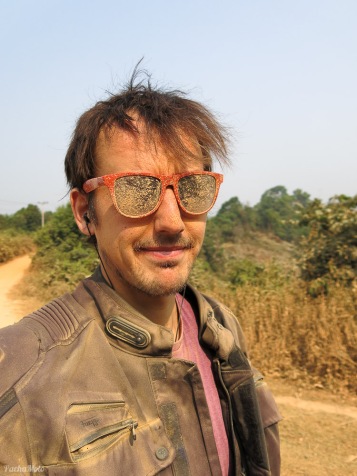 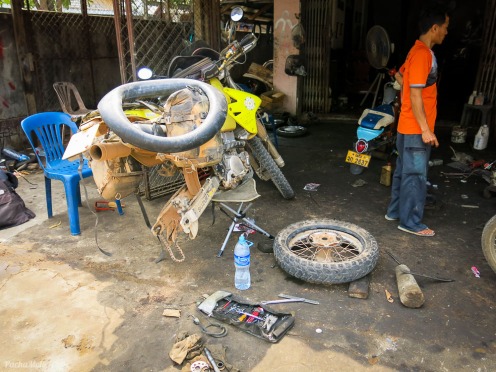 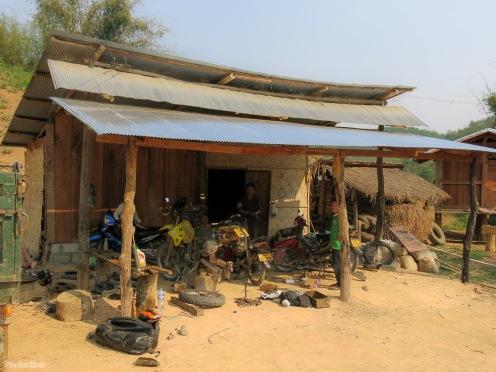 Even with this magnificence to occupy the mind, keeping the synapses at bay as to what the future holds proved at times distracting, swathes of rice paddy passing by as my memory regurgitated everything from Scarborough to my rear wheel and my minds eye imagined everything possible ahead of the front. 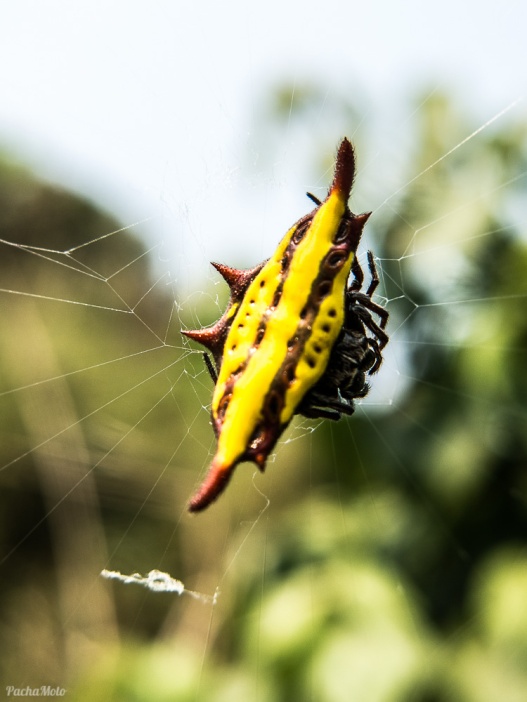 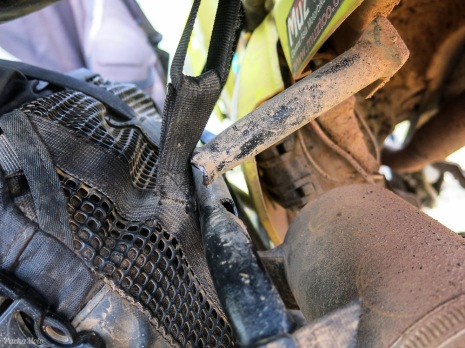 Easy fix to make it to the next welder

Fuel is leaking from the carburetor, the rear tire’s wearing out, the tube is knackered, the water pump cover and rear rack are welded together, countershaft seal is leaking and the rear shock is feeling as used as a mattress spring from the playboy mansions heyday, the bikes tired and needs a riding rest and I’m feeling the same. There are a few ideas up the sleeve of the biking jacket but for now you’ll have to wait and see what happens, because I’m not really sure either. I’m running out of land and I don’t think right now I have the eagerness to give another continent the attention it deserves.

Oh…. And if you’re wondering, a couple of old snowboards and a few dusty bottles of single malt.